Minecraft uses OpenGL to draw what you see on the screen. But interacting directly with OpenGL is quite messy, so it uses the Tessellator class to make things easier.

The Tessellator class is used to add rendering instructions to a Display list.   The Display List will already have been created, for example by WorldRenderer.updateRenderer - GL11.glNewList.  A typical way to use the Tessellator is:

Note that the direction of the v axis in the texture map is opposite to the y axis in world coordinates!   So for example - to draw the grass texture onto the ABCD face: 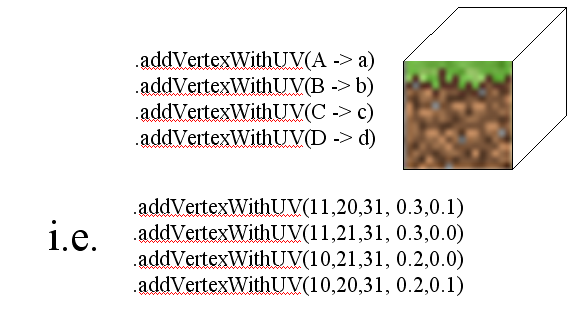 
The points don't have to be on the outer face, they can lie anywhere within the block.


There are some restrictions on what you can do with quads:

Using the Tessellator for other shapes

Although mostly used for Quads, the Tessellator is also suitable for drawing other shapes as well - see the list of suitable drawMode settings below, taken from GL11.class.  The vanilla code uses several of these including GL_LINES, GL_LINE_STRIP, GL_TRIANGLE_STRIP, GL_TRIANGLE_FAN.  They are used in the same way as for Quads - i.e. .startDrawing(drawMode), setting appropriate flags, adding the appropriate number of vertices, then calling draw().

If you're planning to use the Tessellator for anything other than simple shapes, I recommend that you don't!  Use Techne instead, it's much easier.