When you start Minecraft, the Forge code prepares a couple of things and then starts searching for mods.  It looks through the java code in the mods folder until it finds a class which is preceded by the @Mod annotation.

It then reads the unique name of your mod, and constructs the class.  eg

The general name for this technique is Reflection.


Reflection: the ability of a computer program to examine and modify the structure and behavior of an object at runtime.

EventHandlers
Although Forge will call your mod class during startup, that's not enough to do everything your mod needs.  Nearly all of your mod code will be designed to respond to things that happen; for example
* A player places your new "Strawberry bush" block into the world; or
* Your "Laser Cannon" entity fires a beam at a nearby player; or
* It becomes night


This method is used for vanilla objects such as blocks, items, entities, and similar.

The second way is to register an EventHandler for an Event that your code is interested in.
Forge provides a large number of events, such as
* Server TickEvent, which is triggered 20 times per second
* LivingDamageEvent, which is called when a player or entity is damaged by something

This is done by "subscribing" to an event, typically during your mod construction:

** Important Note ** - there are two event busses: the MinecraftForge.EVENT_BUS and your mod's own ModEventBus.

A number of things need to happen during mod startup, before the game starts running, and the order that they occur is important.  During startup, Forge will call your Mod several times to let you add new blocks, items, read configuration files, and otherwise integrate itself into the game at the right times. The most important stages are:

Minecraft Distributions
There is one final concept that is important during the game startup.  There are two different distributions of Minecraft that your mod might be installed in:

Why is this important?    If your mod is installed in a DedicatedServer, some of your setup is not needed (and will cause the server to crash if you try to do it anyway).  Examples are - setting up EntityRenderers, loading graphics, initialising sounds, and referring to any Dist.CLIENT classes. 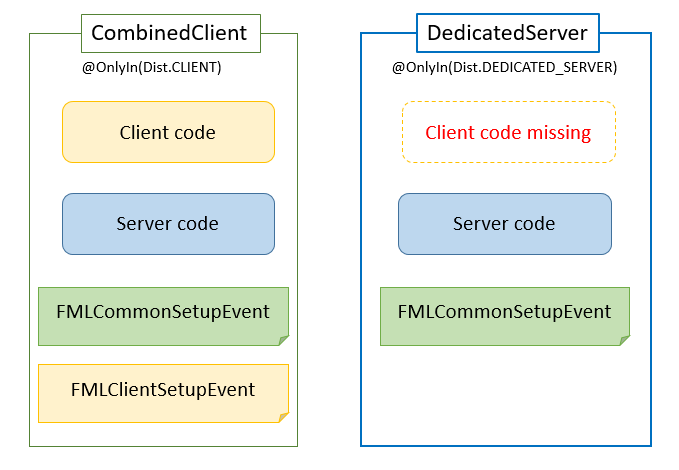