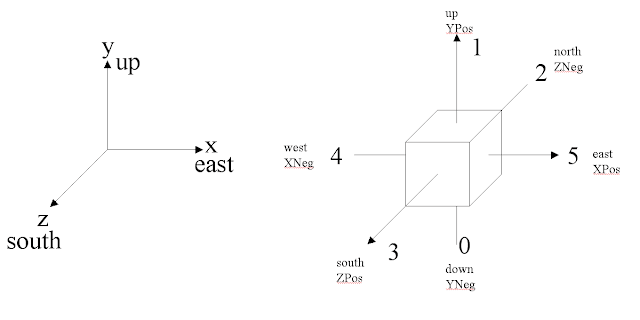 See the EnumFacing class for a number of constants and utility functions related to the six directions (eg getOpposite(), rotateX(), getFrontOffsetX(), etc).

At a minimum, each grid location [x,y,z] contains the following information:
These data are not stored in the Block class.   They are stored in an array inside ExtendedBlockStorage objects, inside Chunk objects.  They are accessed through various World methods such as

If you want to set the state to a particular value, you need to start from the base(default) state, for example
IBlockState bedFacingNorth = Blocks.bed.getDefaultState().withProperty(FACING, NORTH);
It's a bit verbose but that's how vanilla does it.

The main IProperties used by vanilla are
The vanilla code contains helpers to create your own properties with custom names and values; see the vanilla blocks mentioned above for inspiration.


For each given Block, a BlockState instance is used to define the valid states that the corresponding Block can have.  (The name is misleading because BlockState does not implement IBlockState!).  The BlockState can be accessed using Block.getBlockState().  For example, the BlockState for BlockBed contains three properties

The BlockState for your custom Block is created during Block construction by overriding Block.createBlockState().  You need to be careful to set the default state in your block's constructor - see BlockBed for an example.

As for versions 1.7 and earlier, minecraft only uses a total of 16 bits for IBlockState - 12 bits for a blockID plus 4 bits for the state information (previously called metadata)).  In general, this means that a block must have no more than 16 unique states.  Although some vanilla blocks have more than 16 combinations of properties (for example BlockDoor has 64), at most 16 of these are actually stored per grid location.  In the example of BlockBed, although there are 16 possible combinations of values, only 12 are used– see the table below.

Block.getMetaFromState() and Block.getStateFromMeta() are used to interconvert between the IBlockState value and the corresponding integer metadata value (0-15 inclusive).  When implementing Blocks with Properties, you must be careful to only return metadata in the range 0 – 15, otherwise you will overwrite the mappings for other blocks.  Likewise, you must make sure that your getMetaFromState() and getStateFromMeta() match each other.

During the game initialisation phases, a unique instance is created for each block, see Block.registerBlocks(), and the Blocks class.  This means that you can test for equality using the == operator instead of having to use .equals(), for example
boolean thisBlockIsDirt = (blockAtCursor == Blocks.dirt);
Likewise, there is a unique instance for each IBlockState, allowing for example
boolean stateHasChanged = (newIBlockState != currentIBlockState);
instead of
boolean stateHasChanged = !newIBlockState.equals(currentIBlockState);